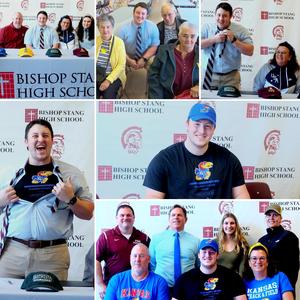 A HUGE Spartan Congrats to our senior, Jacob Cookinham, and his family! Yesterday Jacob signed on to attend the University of Kansas, joining the Jayhawk's Track & Field program. Jacob is one of the best young shot putters in the country. But he's also just one of the all-around nicest human beings we've had the privilege to know. We are SO proud of you Jacob!
<---------- CLICK to read the full press release on Jacob's signing... #SpartansAreEverywhere Jacob committed to Kansas on National Signing Day surrounded by his family and a large crowd of friends and classmates who gathered after school. Jacob’s parents, Richard and Jean Cookinham were present along with Jacob’s sister Samantha, his grandparents, and extended family.  Next fall, Jacob revealed at the event yesterday that will compete as a thrower at the NCAA Division 1 level as a Jay Hawk, after being heavily recruited and going on official visits to 5 schools.

Jacob joined the track team at Bishop Stang as a freshman, and with the encouragement of his coaches decided to join the team’s throwers, which was a comfortable fit knowing that his par

ents and even some of his grandparents were good high school throwers. Since then, he has won countless titles and invitationals, become a top-ranked shot putter, and a National Champion.

During the spring of Jacob’s freshman year, COVID hit, training was virtual, and it was difficult for many to focus on their day-to-day.  It was then that Jacob decided to put in the time and propel his high school throwing career into one of the greatest our area has seen.  Jacob learned the spin technique to replace the more

traditional slide technique, and it suited him.  When track resumed in a modified version in the winter of his Sophomore year, after a few key wins, it became clear that Jacob could become a highly recruited shot-putter with dedication and hard work.

Jacob’s coaches at Bishop Stang, Steve McGonigle, Sydney Roberts, Julie Isaksen and Jim Fortin, spoke highly of Jacob’s focus, work ethic, and character.  Although he was undoubtedly an elite thrower, Jacob encouraged and valued his teammates in their events and races.  Jacob spoke highly of his relationship with his coaches, who he said “were supportive not just in this decision but for his entire career at Bishop Stang.  With a big smile, coach Jim Fortin quickly reminded the crowd, “Jacob still has two seasons as a Spartan left.” Each of his coaches spoke of Jacobs's kindness and his character, and they look forward to Jacob’s senior seasons.  The team will definitely benefit from the points he will likely generate for the Spartans.

him for his recruiting trips. However, before he leaves for Kansas, he has some major life milestones, and as a motivated top-tier athlete, Jacob has set athletic goals for himself.  If the energy and the crowd in the room when Jacob signed is any indicator of the support the Bishop Stang community will put behind him this year, there is a good chance that Jacob will reach some, if not all, of those goals.